Posted on Published: August 18, 2020 Categories All Recipes, All Things Chocolate, Guides and How to's 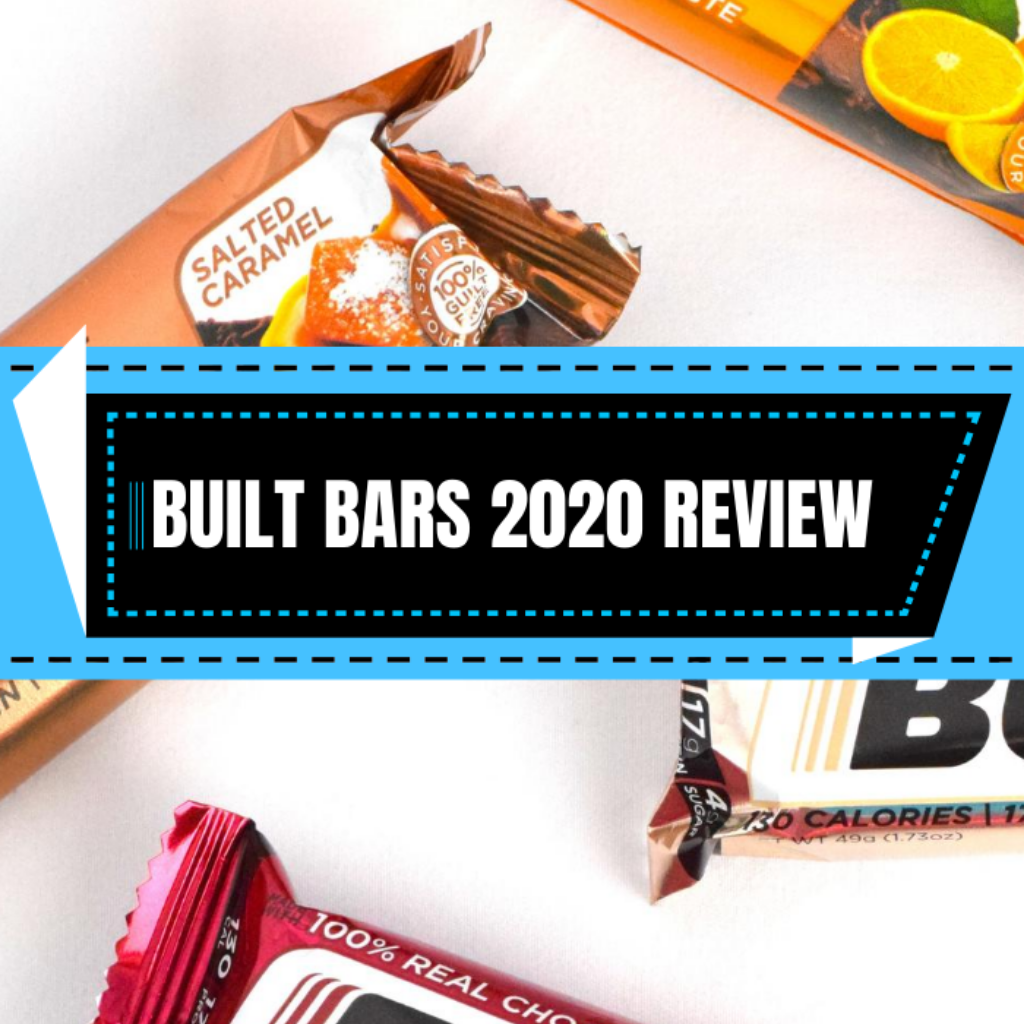 Back in 2019 I did a built bar review that I titled “Honest Built Bars Review | The Best Low Carb Protein Bars I've Ever Had“.

Since then that review….and BUILT BARS itself have taken off. So I'm back with another Honest Built Bars Review for 2020.

This review includes all of their NEW flavours and improved bars. Not only that, they've also released new products like NEW built boost flavours and an entirely new protein + energy product that we'll discuss in a later post!

If you haven't already heard of Built Bars, they are a low carb protein bar company that literally took the market by storm.

Their bars are low in carbs, high in protein, low in calories (seriously it amazes me how good built bars are for their minimal calories) and the taste is phenomenal. 100% better than any other protein bar I've had.

Built Bars are Gluten Free, contain zero preservatives and are naturally flavoured, made with 100% REAL chocolate.

Built Bars as a company also really does appreciate your feedback and they. have the best customer service I've ever dealt with. (No seriously, they go above an beyond, it's amazing)

I WAS gifted these products to give my review on and am now an affiliate but I'm not sponsored by them in any other way.

Actually the reason I was gifted products/ asked to join their affiliate program in the first place was because I constantly kept posting about them (for no monetary gain) because I was just really obsessed with them LOL.

Another great bonus about built bars is that their shipments arrive quickly with FREE shipping (even for someone like me in Canada!) This is a huge win because so many times I'll want to try protein bars just to find out they have some ridiculous shipping charge or don't even ship to Canada to begin with.

You also typically receive a coupon off of your next purchase…along with of course, you're beautifully packaged bars!

They've really stepped it up with the packaging since the first bars I received. The new bars are so bright and colourfully packaged and even the box looks more professional.

…just wait until we get into how they changed the texture of the bars as well…OMG.

With that said, here's the breakdown of the NEW and enhanced built bar flavours that I was able to try:

If you remember the texture of these bars from my last post, I said they were similar to a cross between marshmallow and taffy on the inside with a thin real chocolate coating. WELL. Let me tell you, they've switched it up a bit.

They used to be a little tough to chew at times (not bad at all but chewy). But NOW they are so soft and much easier to bite. Some bars I noticed a bigger change with than others but for the most part the texture has greatly improved.

The bars are also thicker than before with a slight bit more calories (think 130cals vs. 110cals before, 160cals vs 130cals before and 180 cals vs. 160cals before depending on the flavour)

But I'm not mad about the calorie increase because it's mainly coming from protein while the NET carbs of the bars all remain low! (Most of the bars have ~ 4g of NET carbs)

Now I'm going to rate these from least – most favourite as I did in my original Built Bar post. Since I've went over texture and calories, I'm not going to go over it too much for each bar as they are all pretty similar but I'll state any noticeable differences.

BEFORE WE START, HERE IS A COUPON CODE YOU CAN USE FOR 10% OFF YOUR BUILT BAR ORDERS: SAM10OFF

Use the discount code at the checkout OR you can just click the link above to automatically apply it (double-check the discount is still applied before checkout and if not just manually type it in).

P.S ignore my terrible nails in this post, almost all the bars I ate while in the process of baking something else for the blog, so things were a bit messy, LOL. Also most of the photos were taken on my phone (only a few on my Nikon Camera) because I was eating on the go so I apologize for that as well! 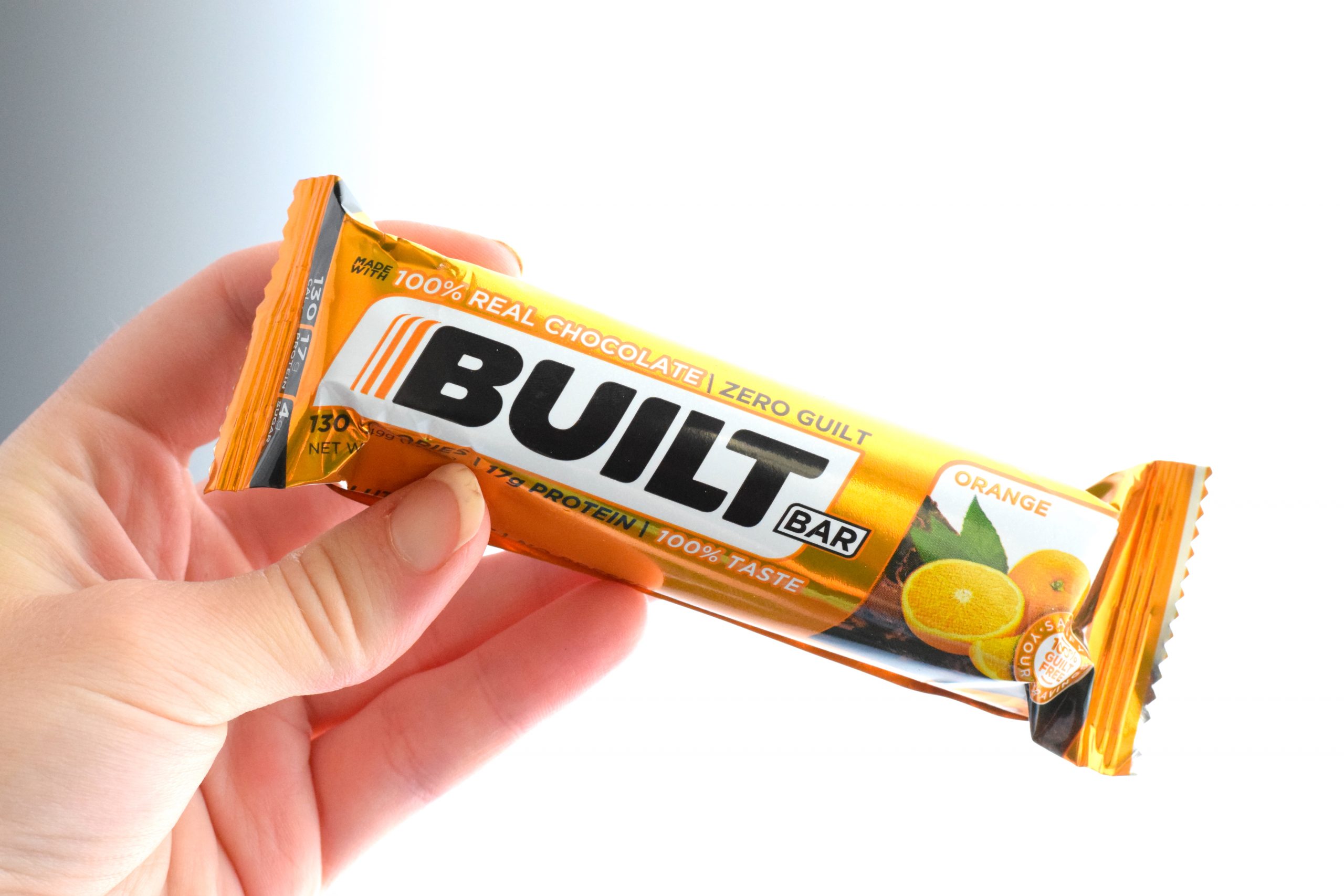 I'm so sorry to all the orange lovers out there but this one is just NOT for me. Nothing to do with Built Bars, I'm just not a fan of orange and chocolate, LOL. 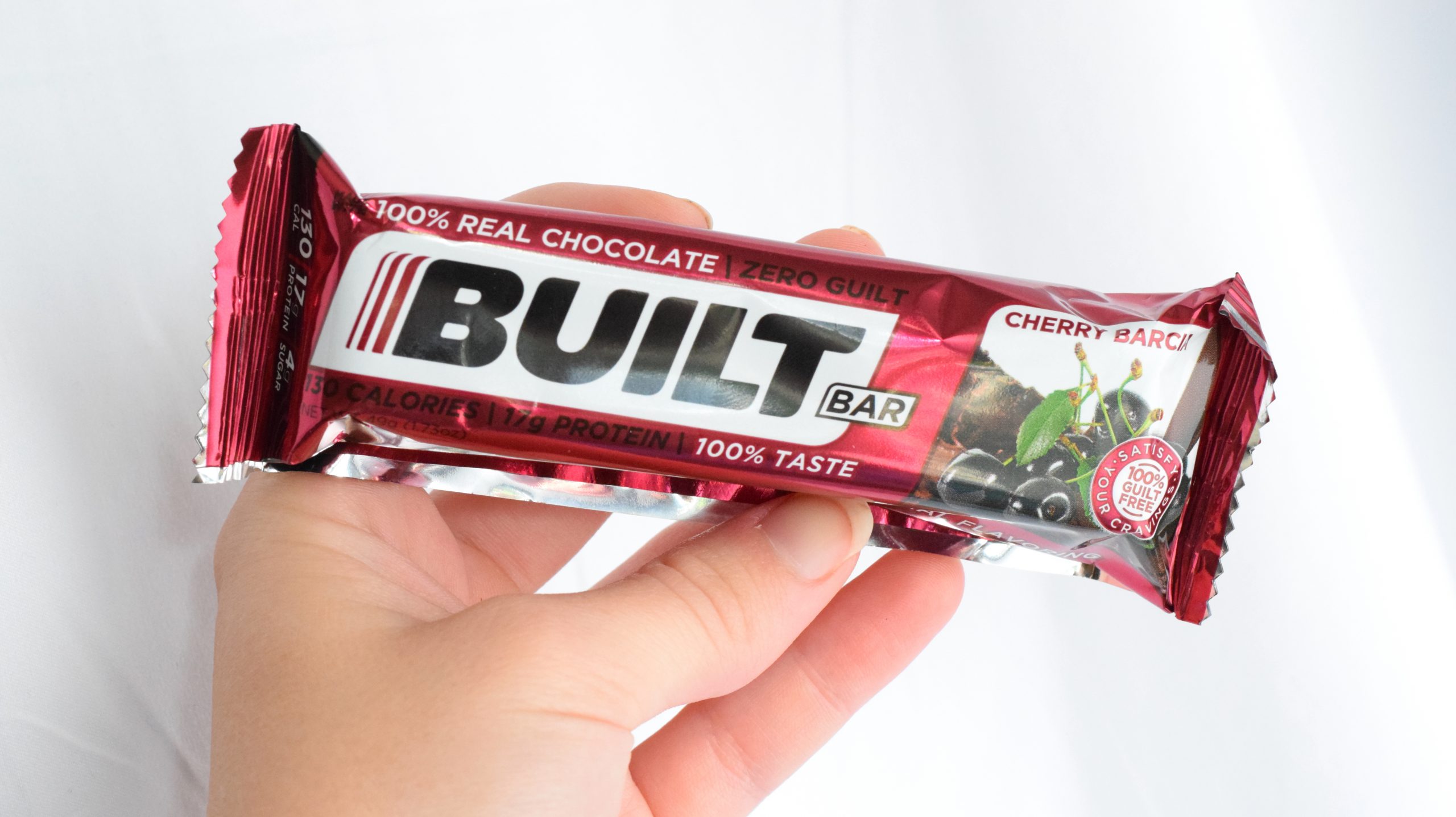 Again, nothing to do with the bars themselves. I love these so much but Cherry is not my thang.

But if you're a cherry lover, these will be your new favourite. My other family members loved this one and said it reminded them of “Cherry Blossom Chocolates”. 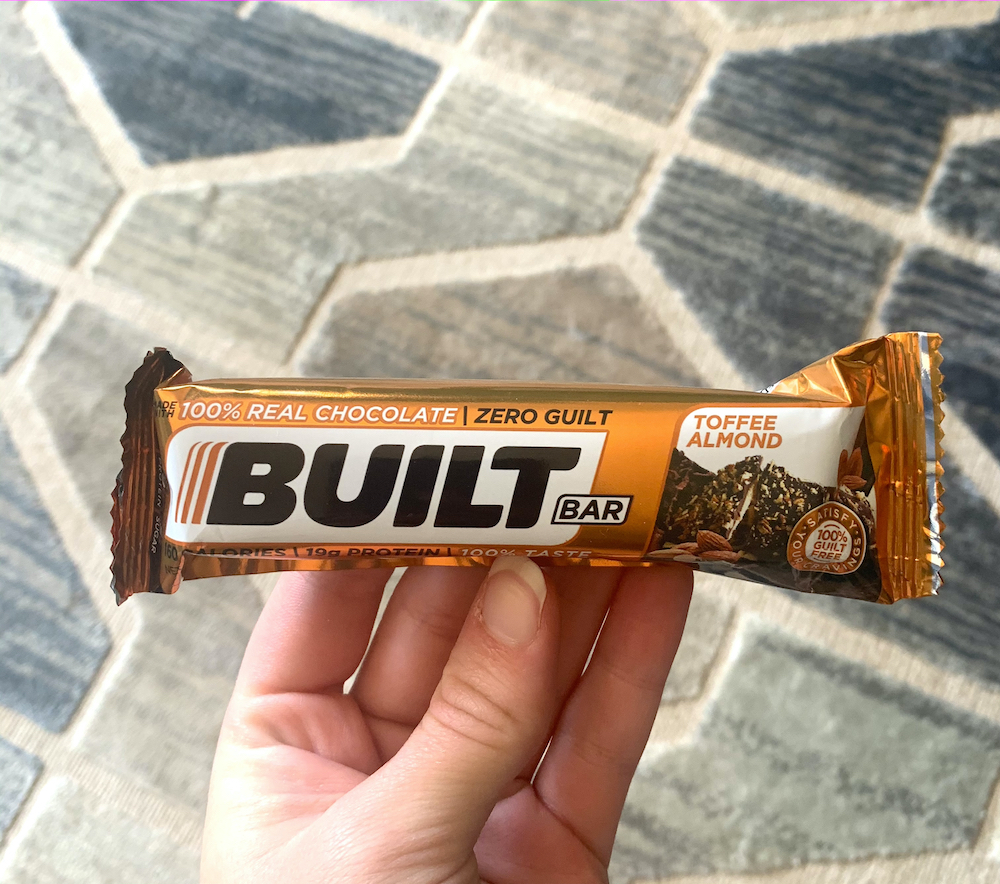 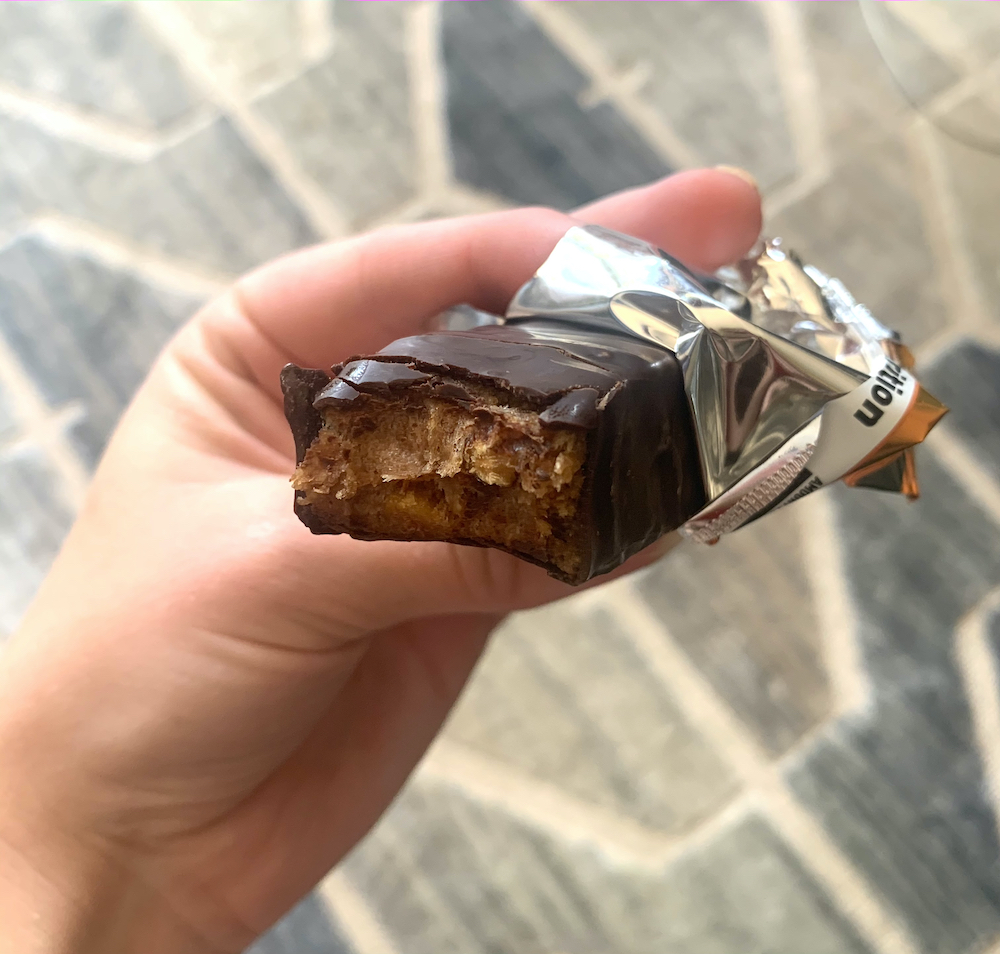 This one is okay, I don't think anyone would ever call this a bad protein bar! But it just tasted kind of boring to me after having built bars for so long, a few of them have a generic similar flavour. The texture is still slightly chewier than other built bars. 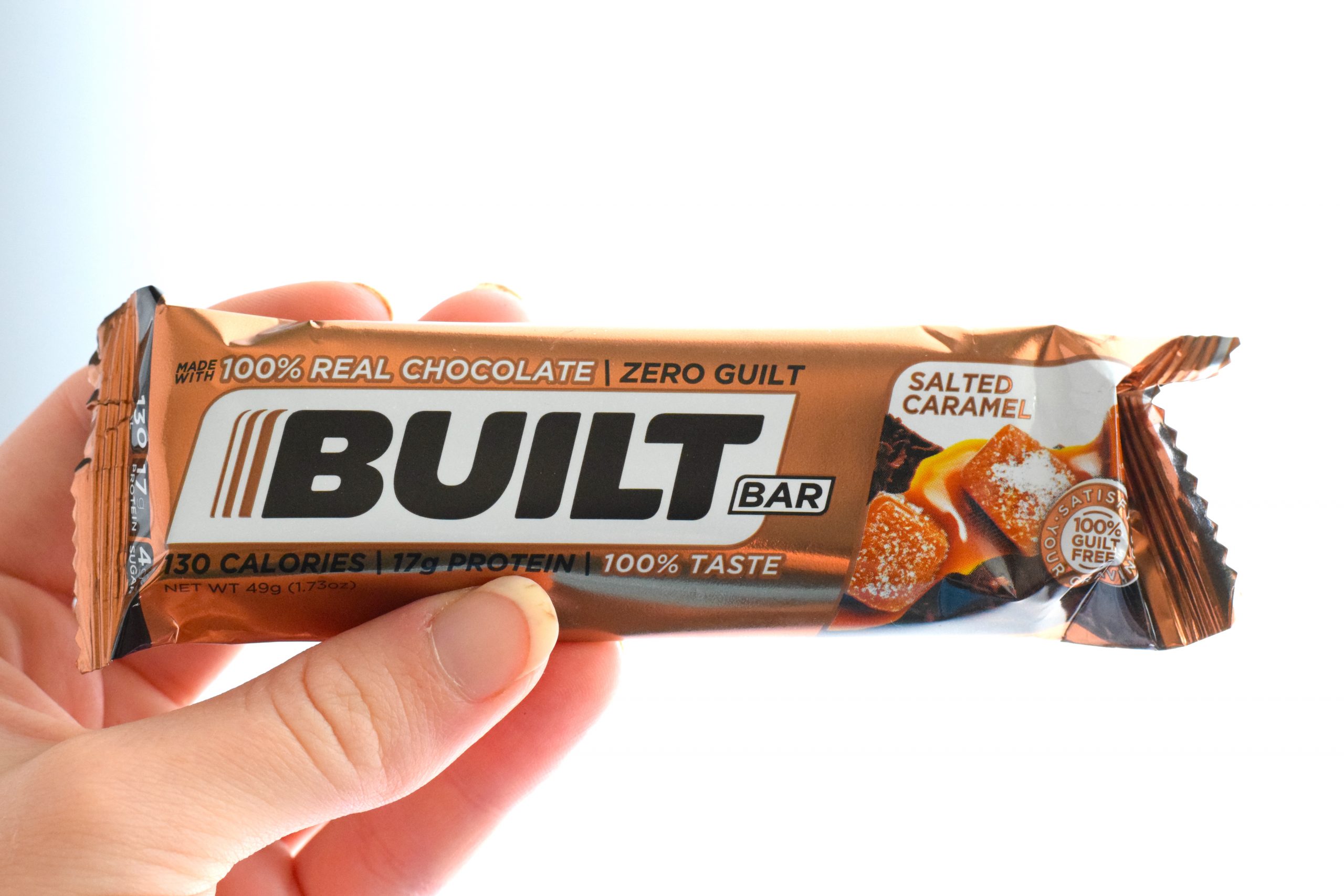 Going along with the toffee almond, this is not a bad protein bar, it just tastes really similar to the toffee caramel bar and isn't my number one flavour BUT I'll still happily eat it for a snack! This doesn't have a very pronounced “Salt” flavour. 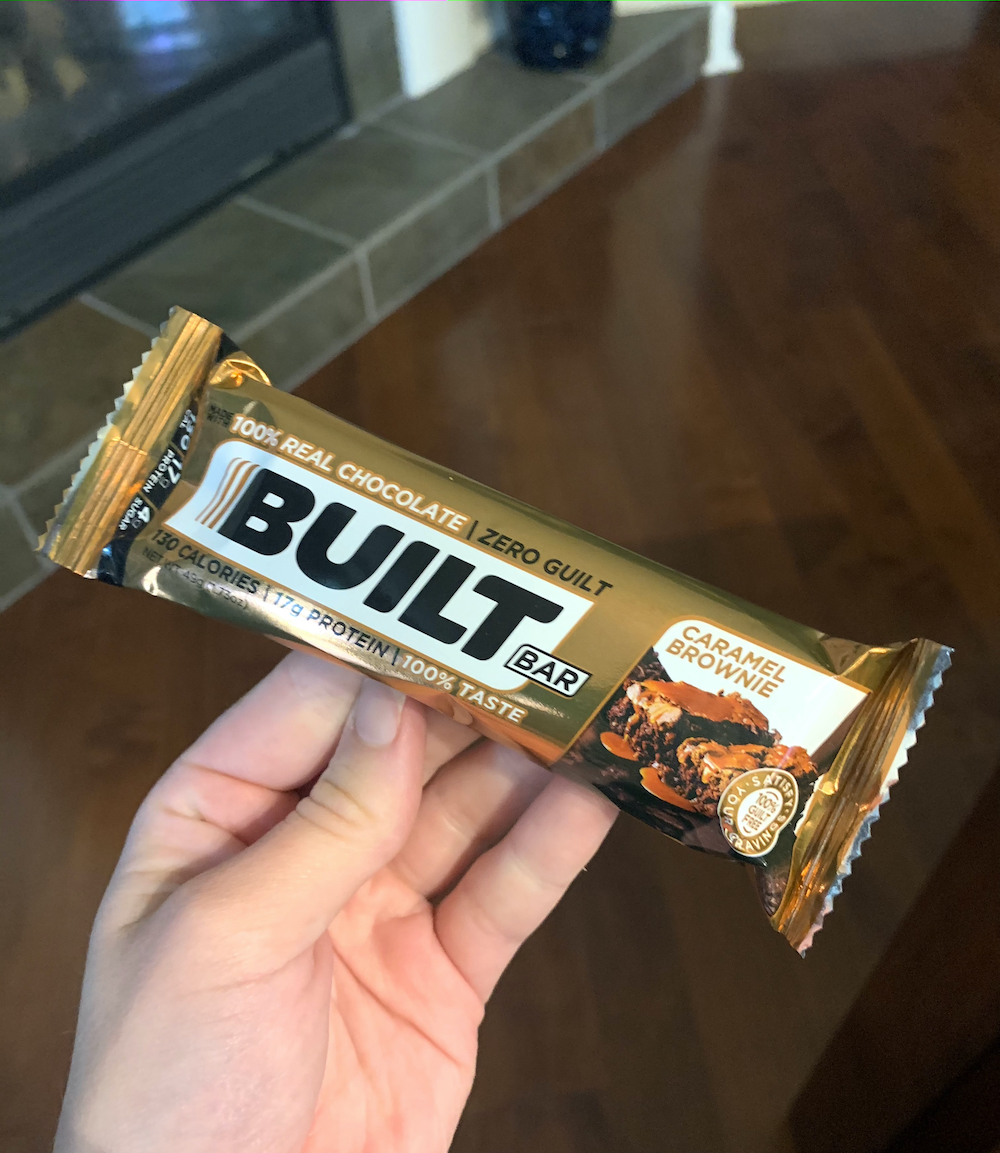 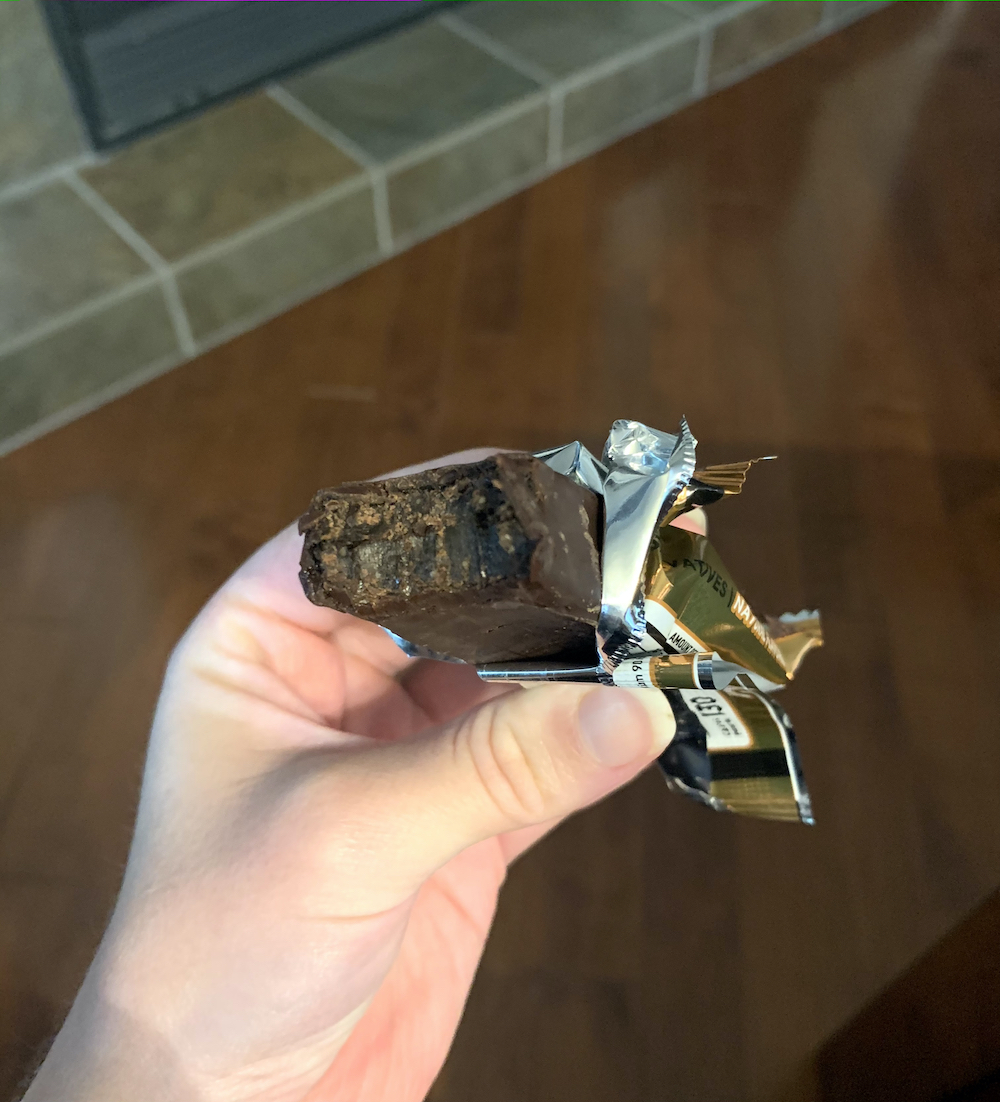 Man, I feel like I am ragging on all the bars but I promise they are so good! This is like trying to pick the worst from a group of individuals that are all extremely talented, LOL.

This bar again is NOT BAD. It's definitely tasty. But it doesn't stand out to me as much as other flavours. I'd still recommend you try this one for yourself though because I could see people liking it more. 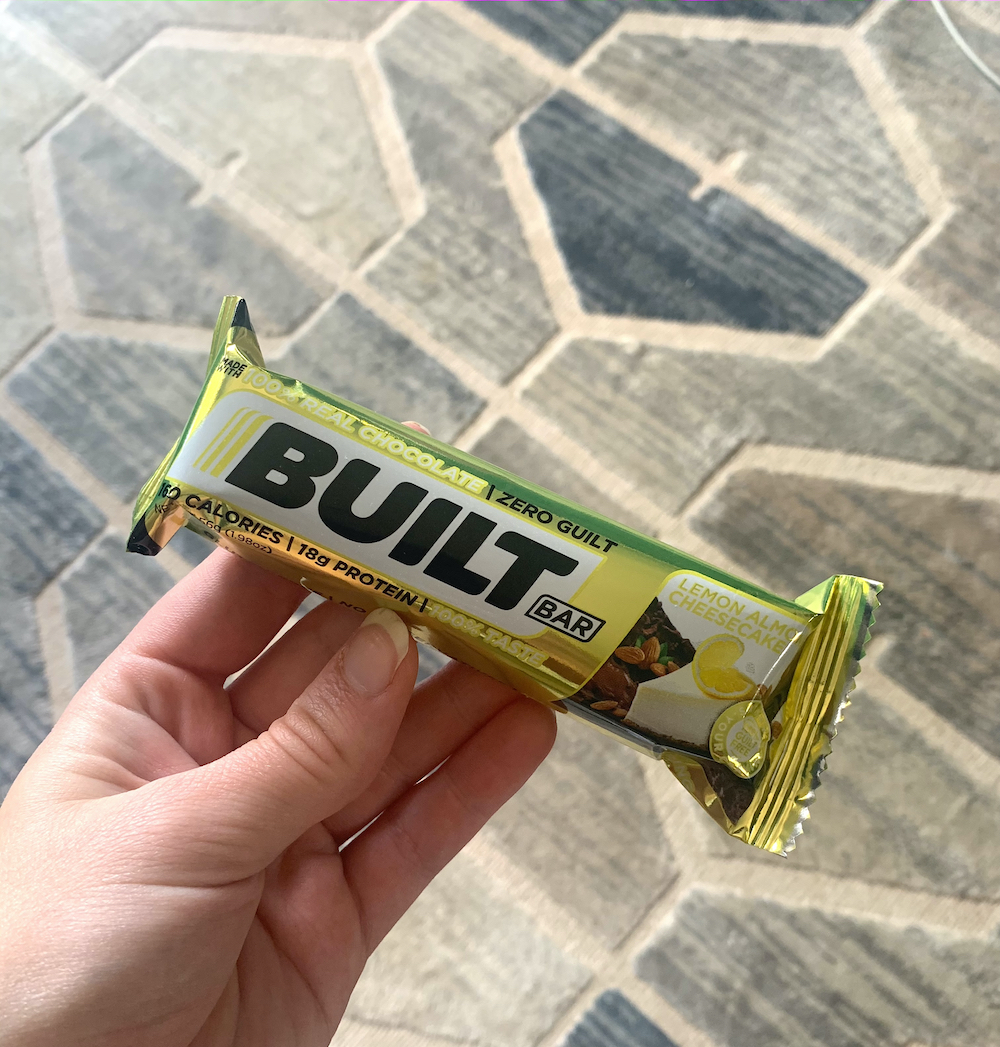 We are moving up a bit, alright. I normally don't like lemon with chocolate but this is actually not bad. I like the addition of larger almond pieces in the new built bars, it adds something to the usually soft texture. I don't really get “cheesecake” from this one, but nonetheless it's good. 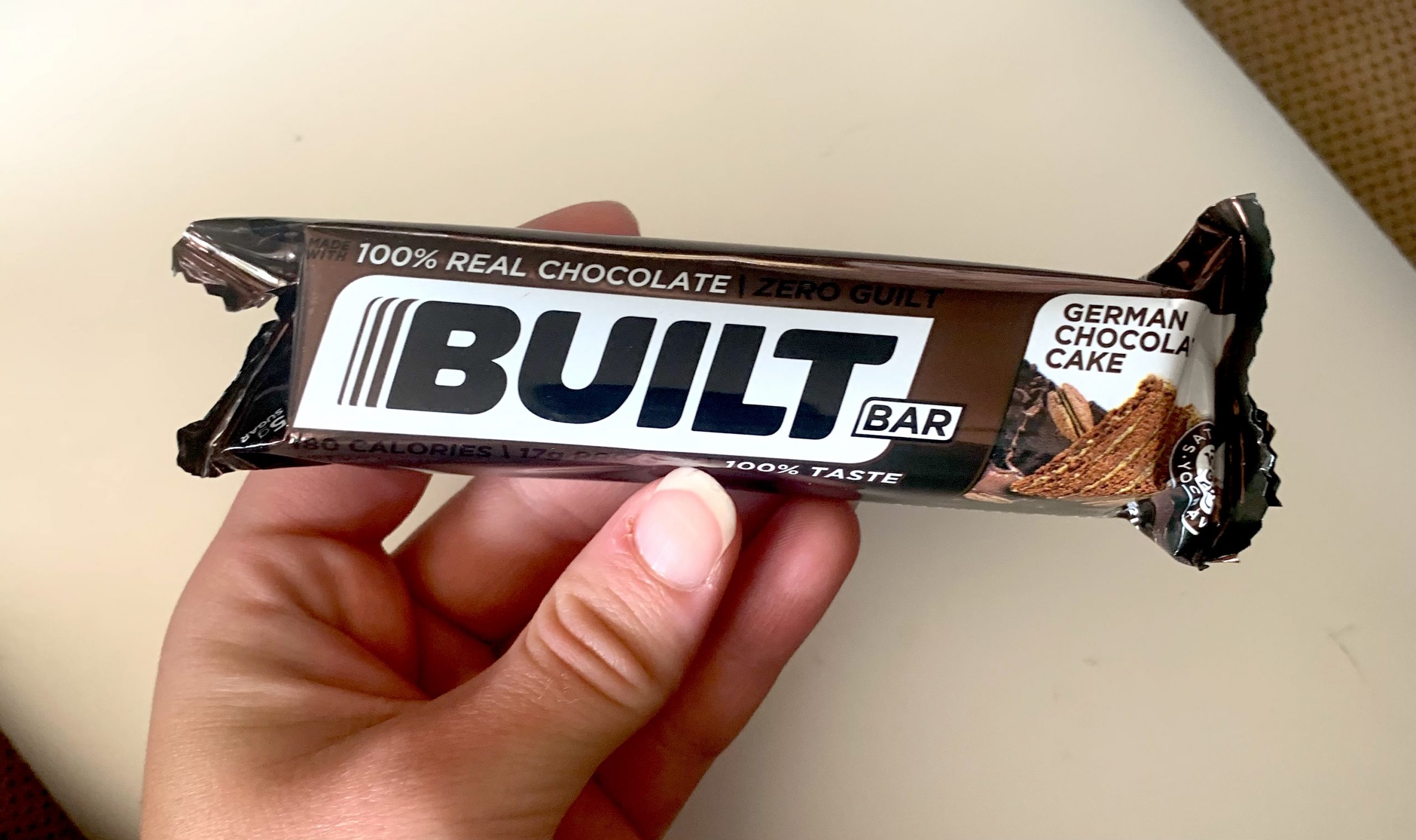 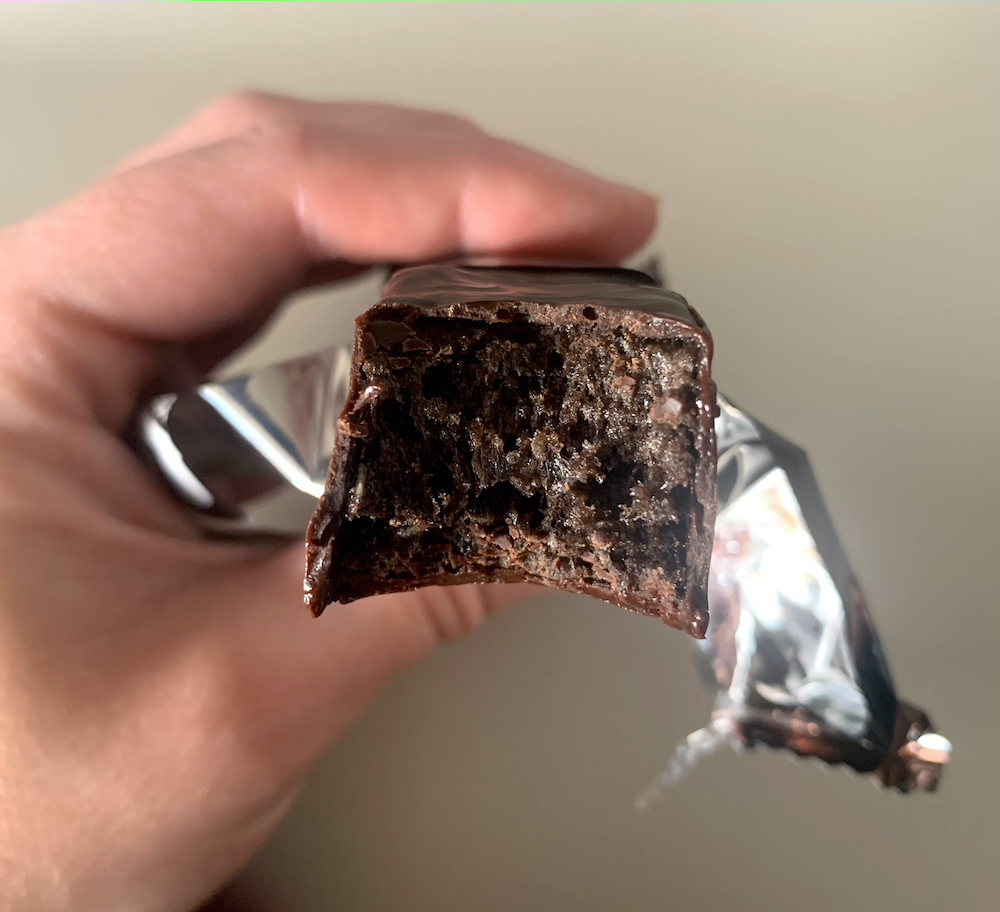 This one is good! It just tastes very similar to the double chocolate to me and I liked it slightly less so I gave it a lower rating but if you like chocolate, you will still enjoy this bar for sure! 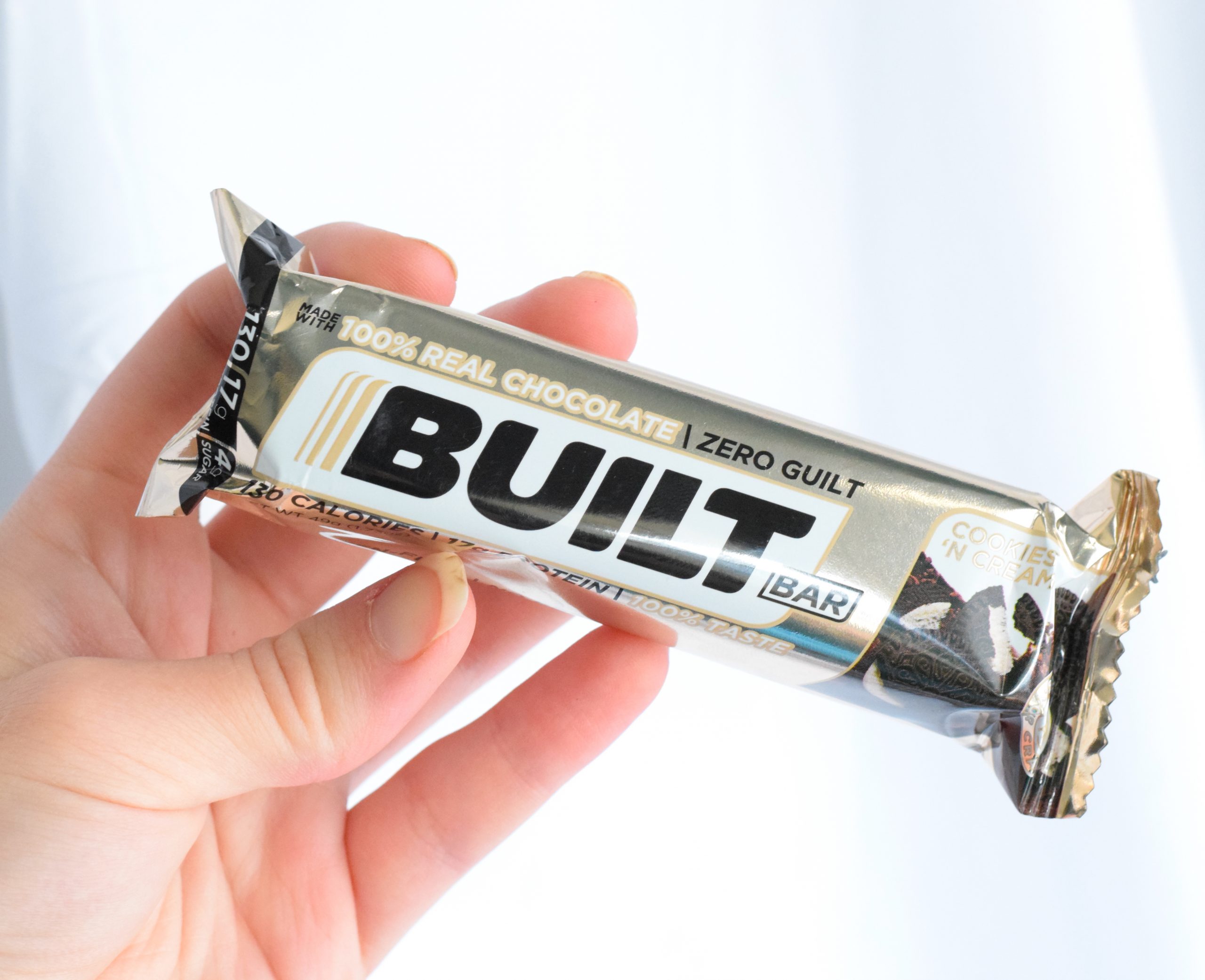 I find cookies n' cream is a really hard flavour to get right in protein desserts but Built Bars does it quite well.

It's not exactly a traditional cookies and cream flavour but whatever it is, I like it and I'd eat it again!

It's a nice change from the other bars because I feel like doesn't have that same hint of caramel flavour that the toffee almond, salted caramel & caramel brownie all share. 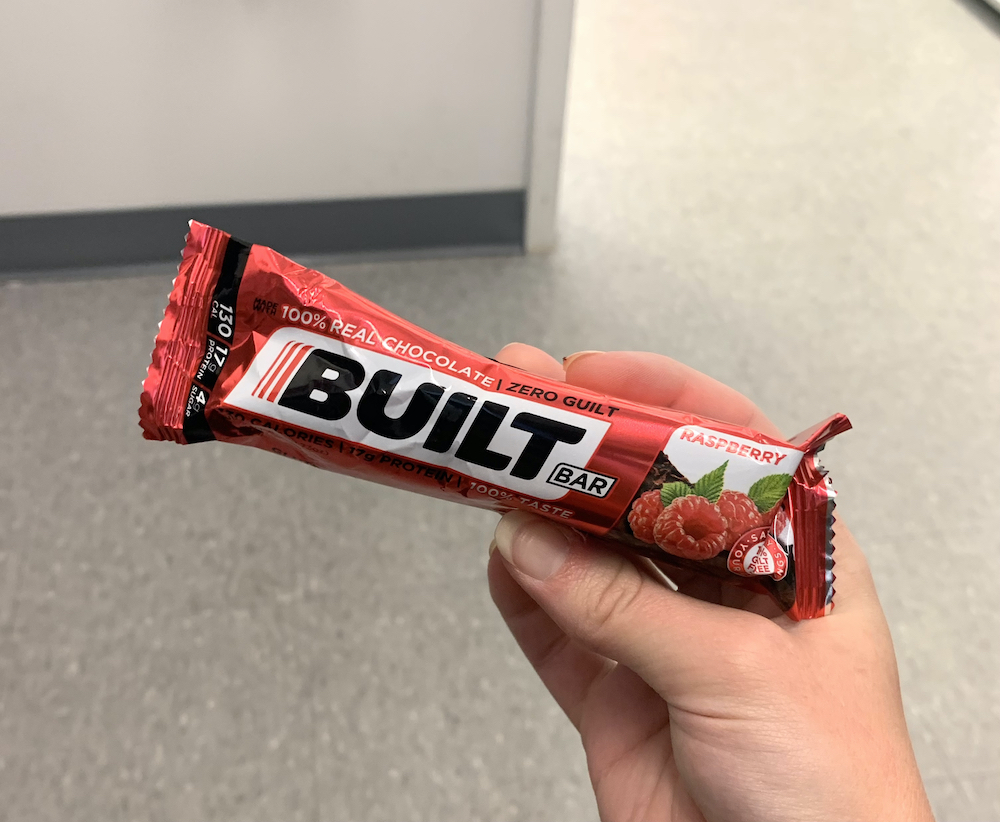 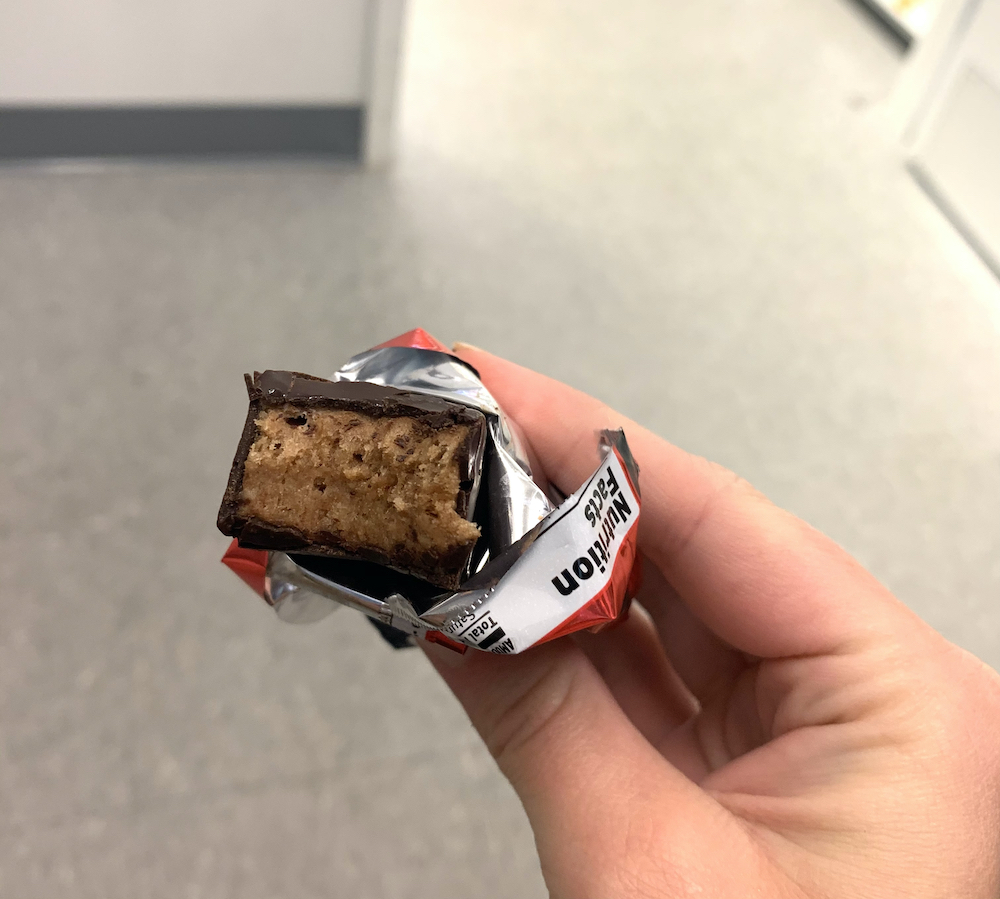 I'm usually not a fan of fruity flavours with chocolate but the raspberry bar I make an exception for. This one is tasty. I like the combination of tart and sweet together. I actually created some muffins inspired by this bar.

For some reason, apparently I forgot to take a photo for this one! But the texture looks similar to the Mint Chocolate bar. 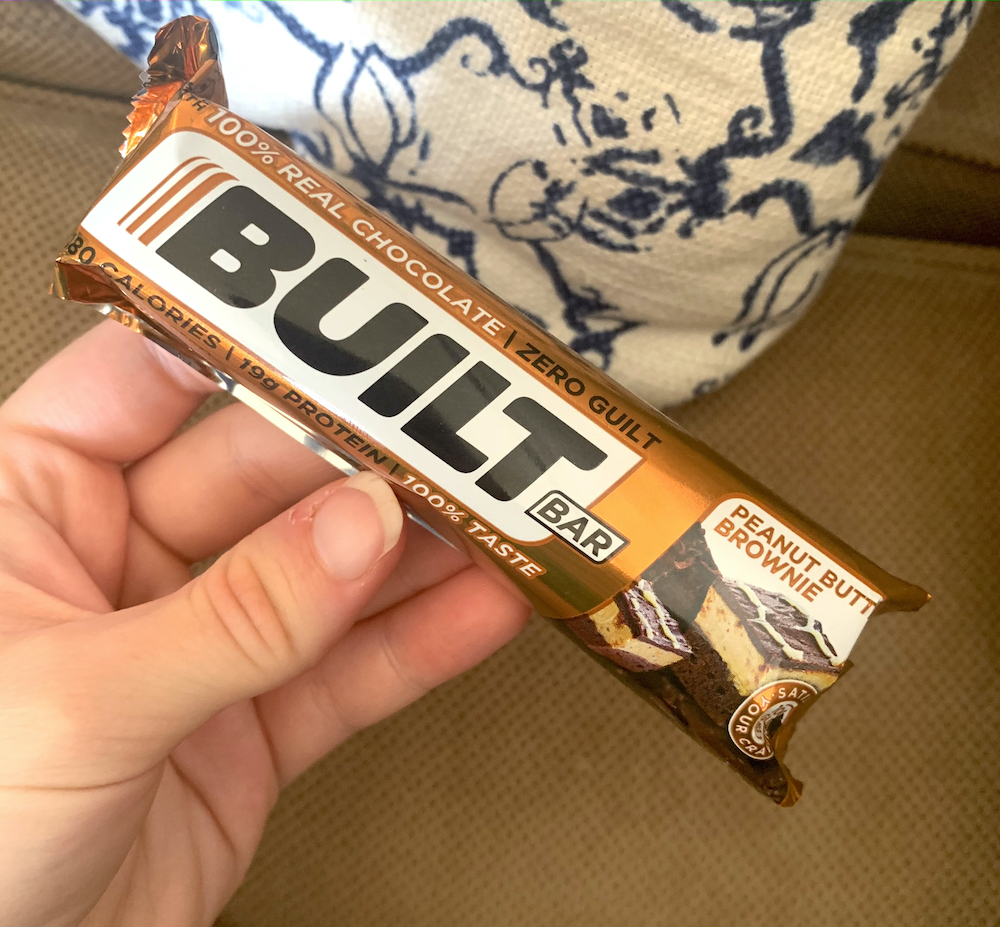 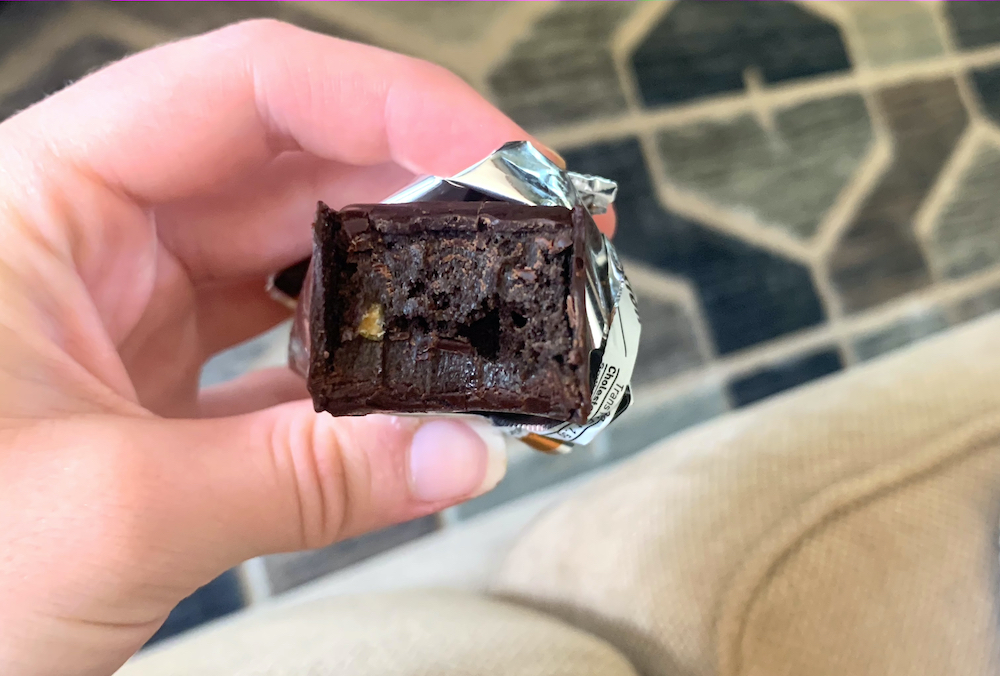 I typically eat this one when I want to stay full a little longer! The amount of chopped peanuts in the peanut butter bars has also improved so I appreciate that! 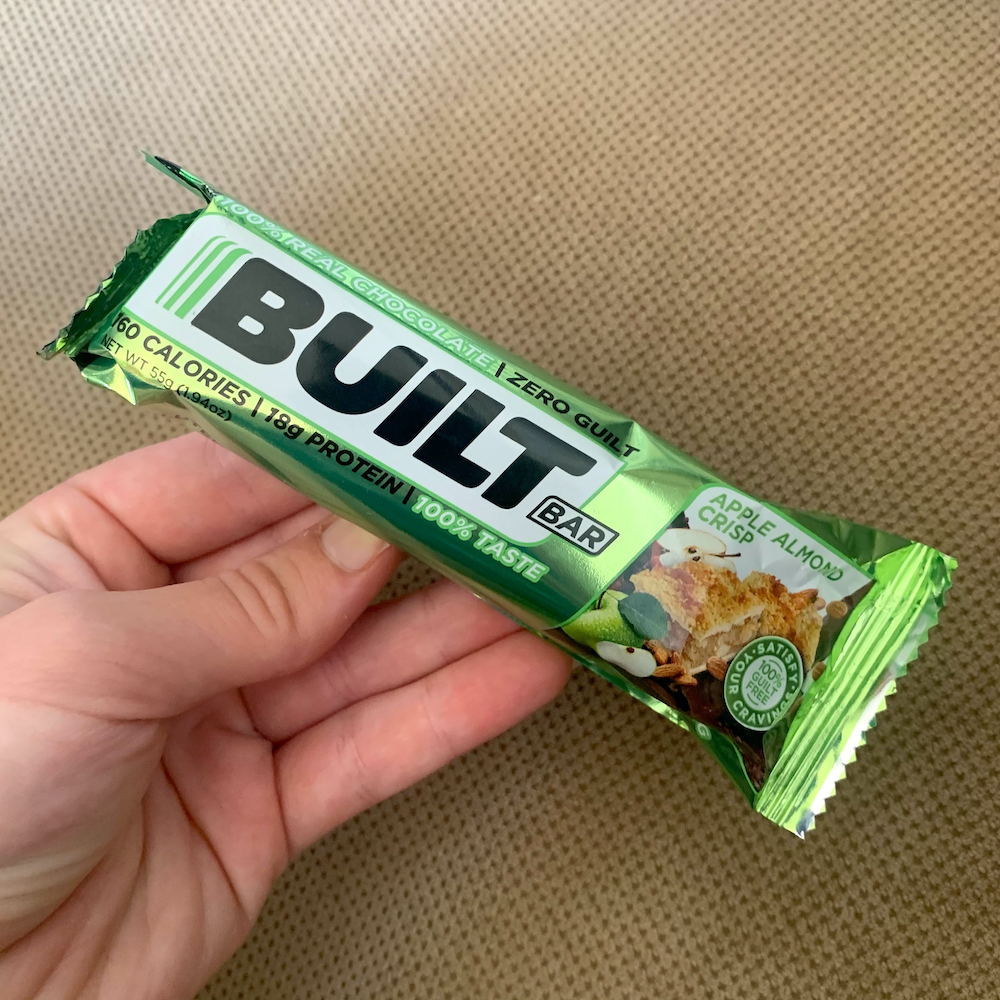 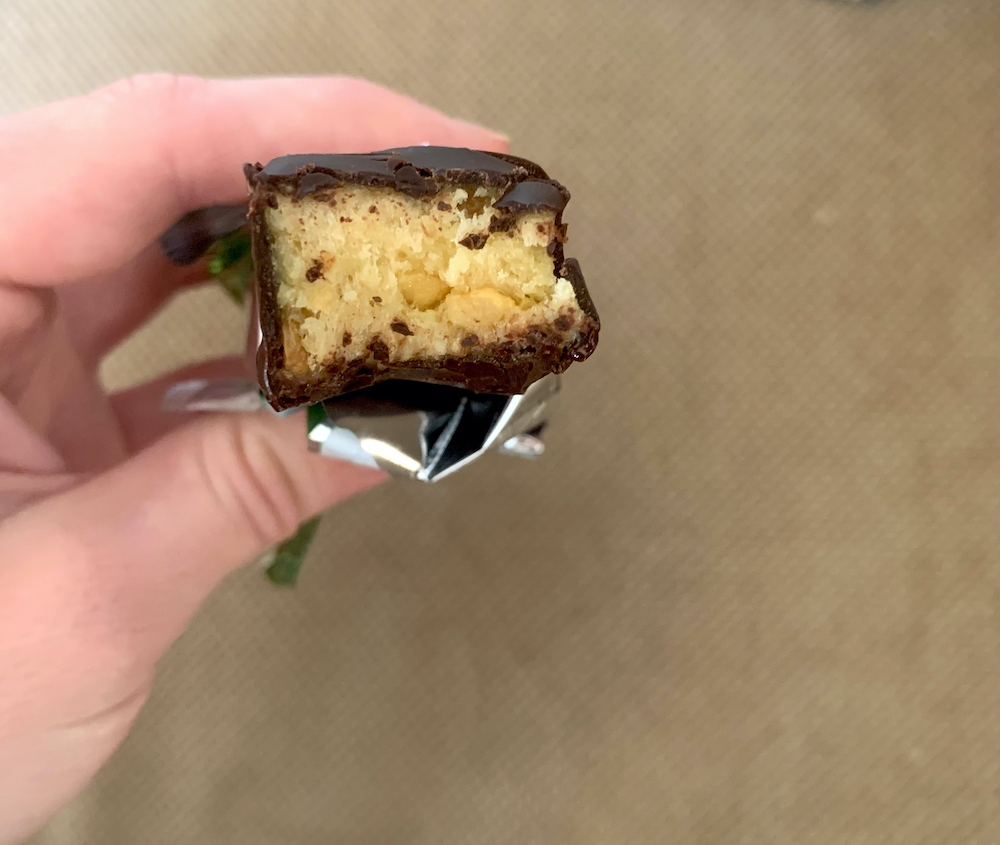 I don't know if I get the strongest apple flavour from this but I really liked the bar, LOL.

I can't really describe the flavour but it had nice large pieces of almond which I think is why I liked it so much. It also had a slightly different flavour profile than the typical built bar flavour I mentioned earlier. 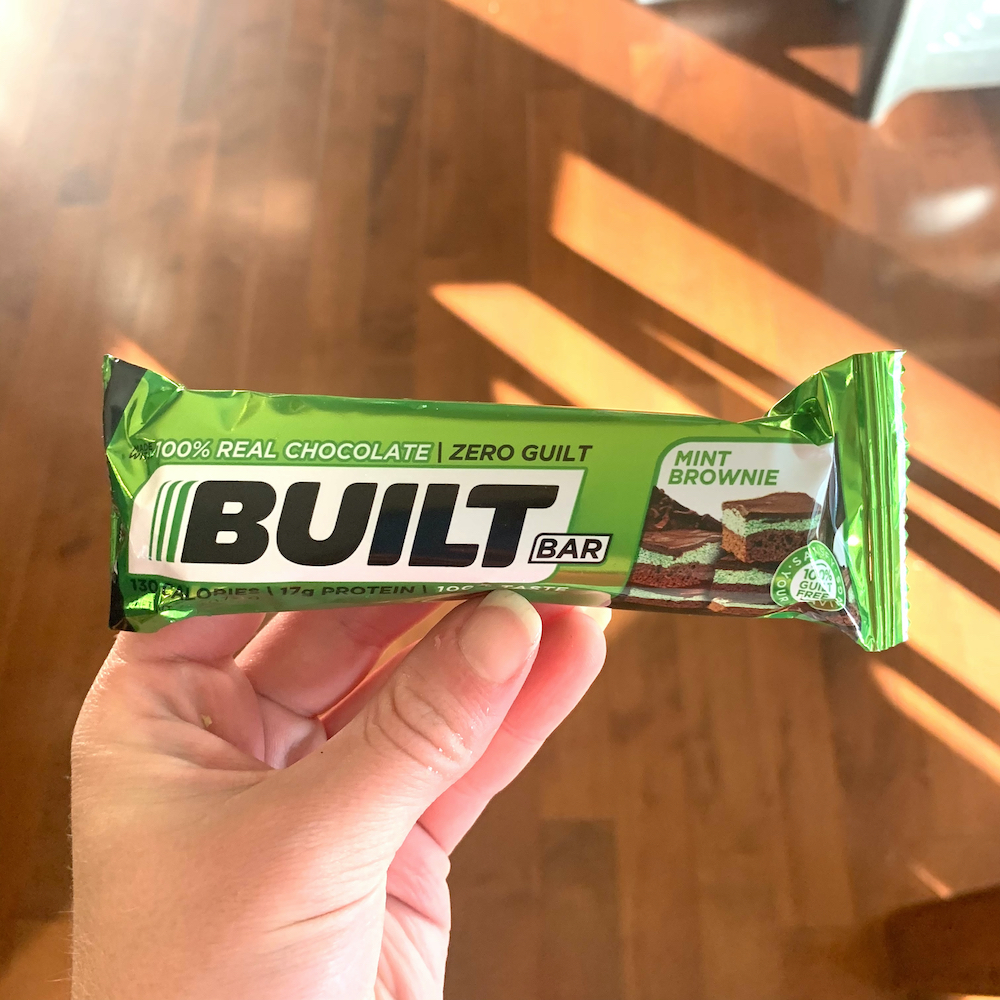 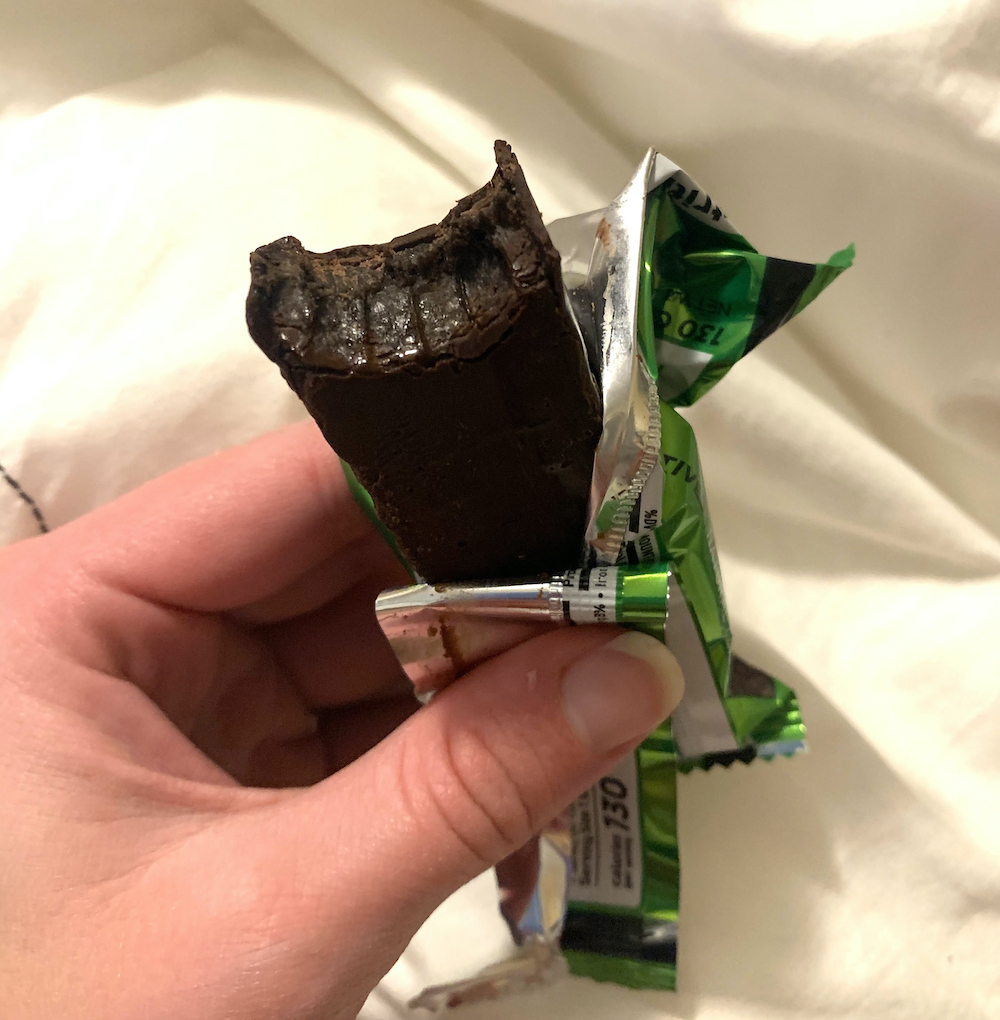 This one used to be one of my top 5 favourites as well! I still really love it but I think I ate too many to enjoy it the same these days, haha.

But if you are a chocolate mint fan, these honestly blew me away the first time I tried them. They taste like thin mints in a bar form. I was obsessed.

The texture of these also doesn't seem to have changed too much, maybe slightly easier to chew! And of course the bar is thicker like all the new built bars! 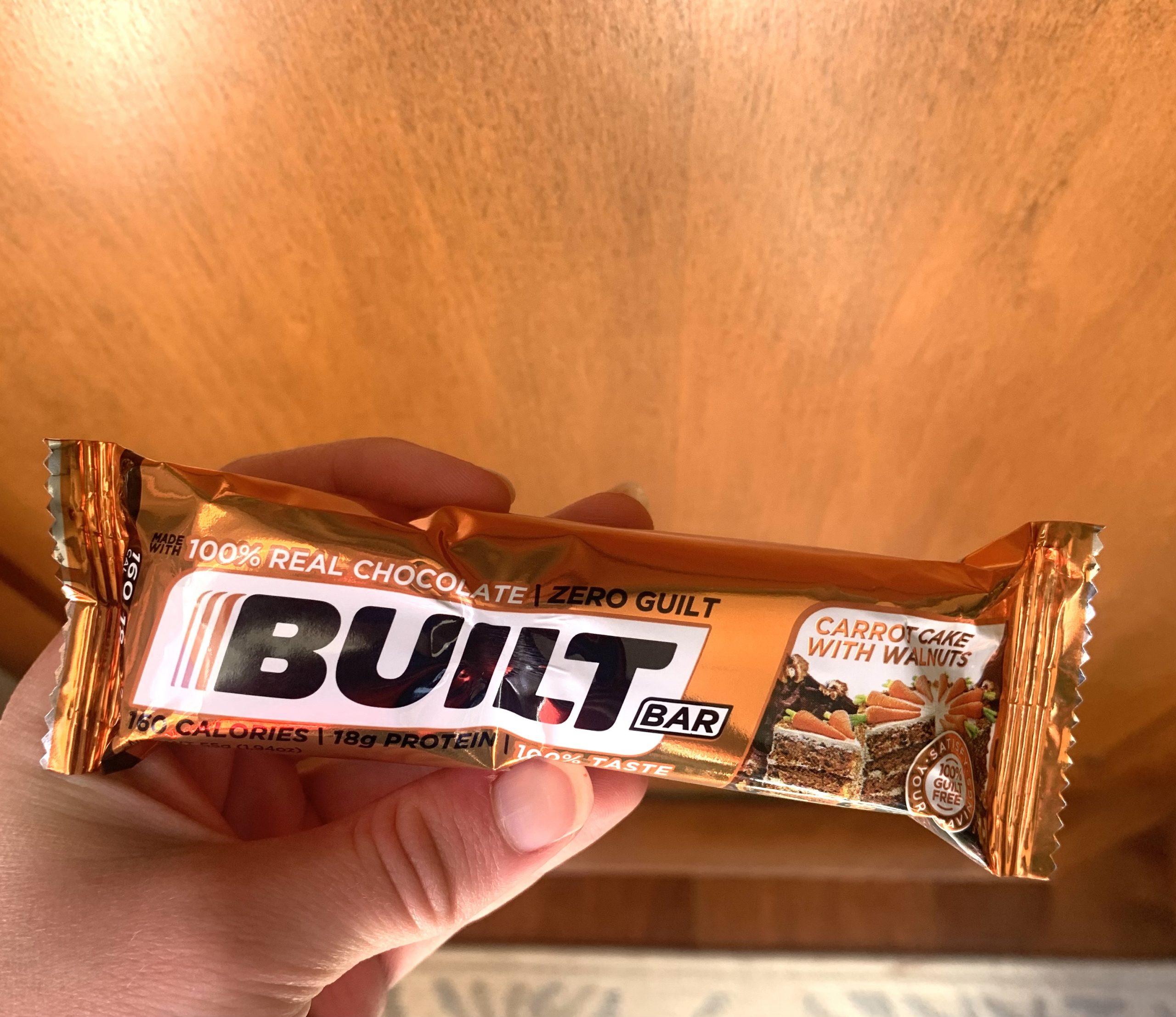 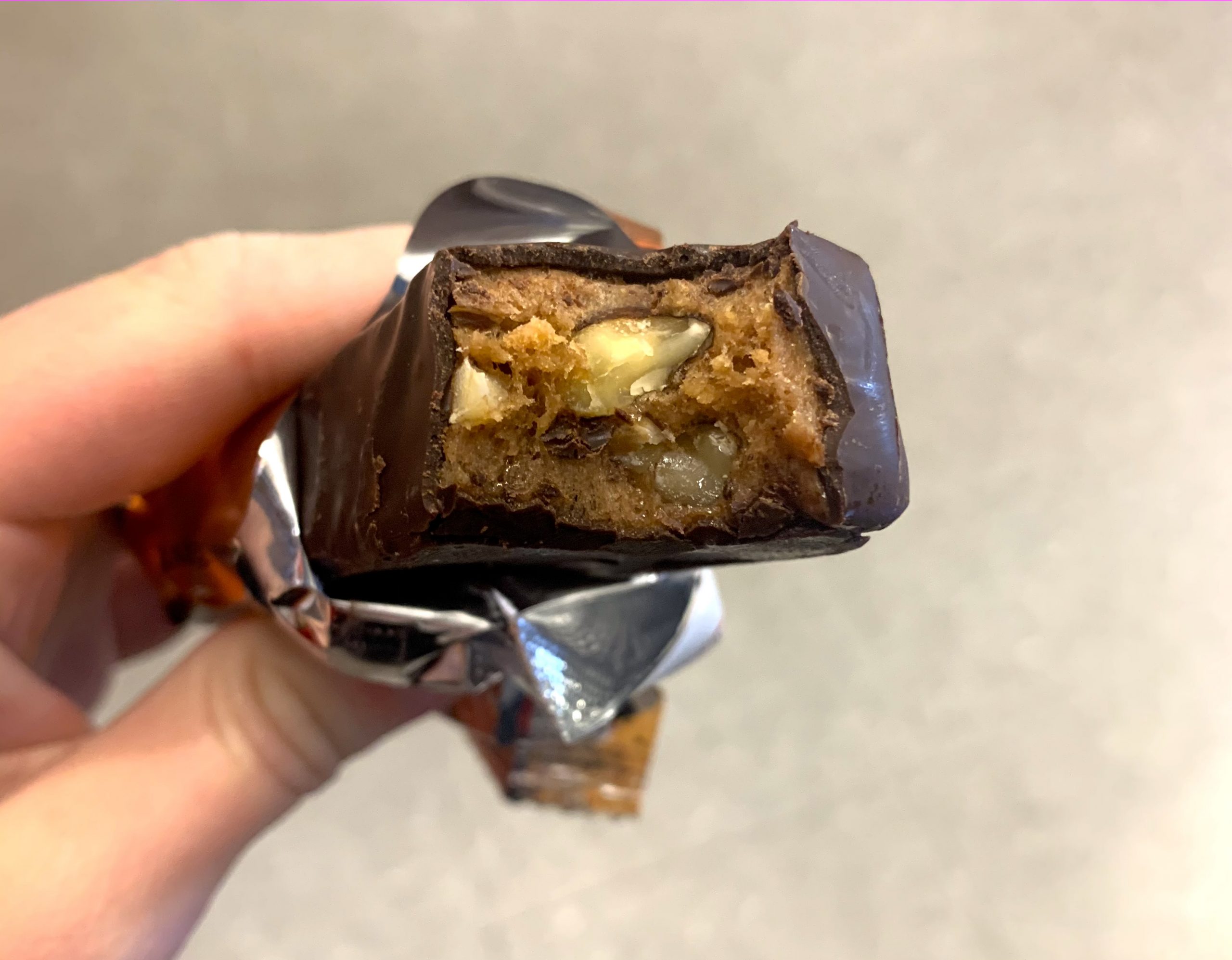 This bar is a little weird..but in a good way! It has a strong hint of nutmeg or allspice right when you bite into it but then the walnuts compliment it nicely.

I don't really get “Carrot Cake” with this bar but I get spice cookie or spice cake. It's really nice if you enjoy fall flavoured desserts. 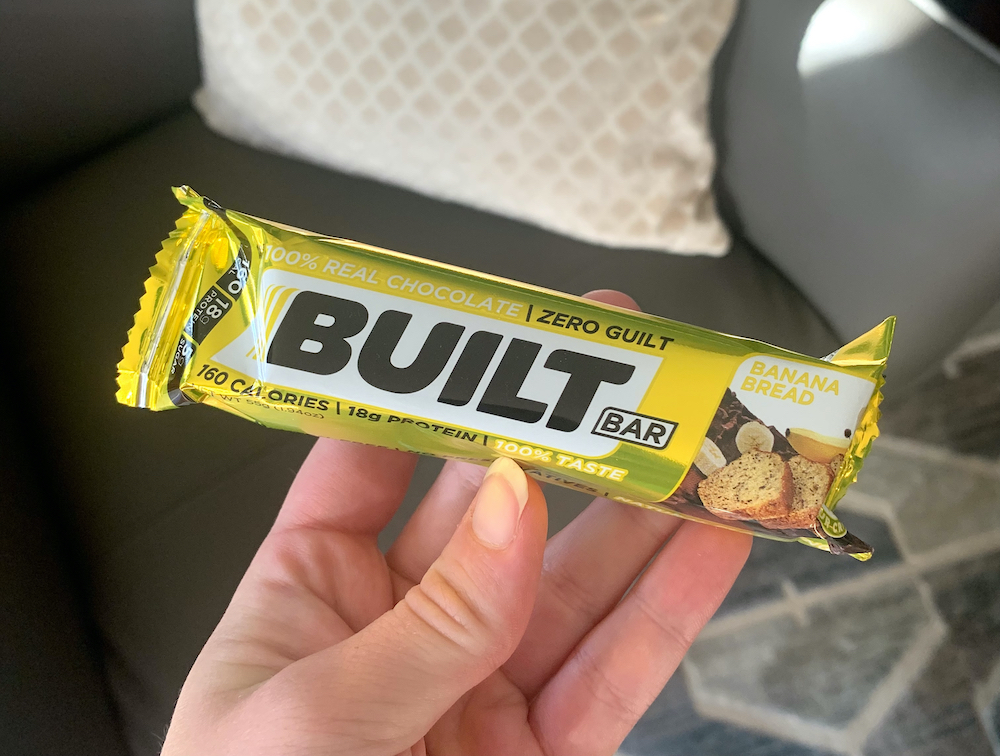 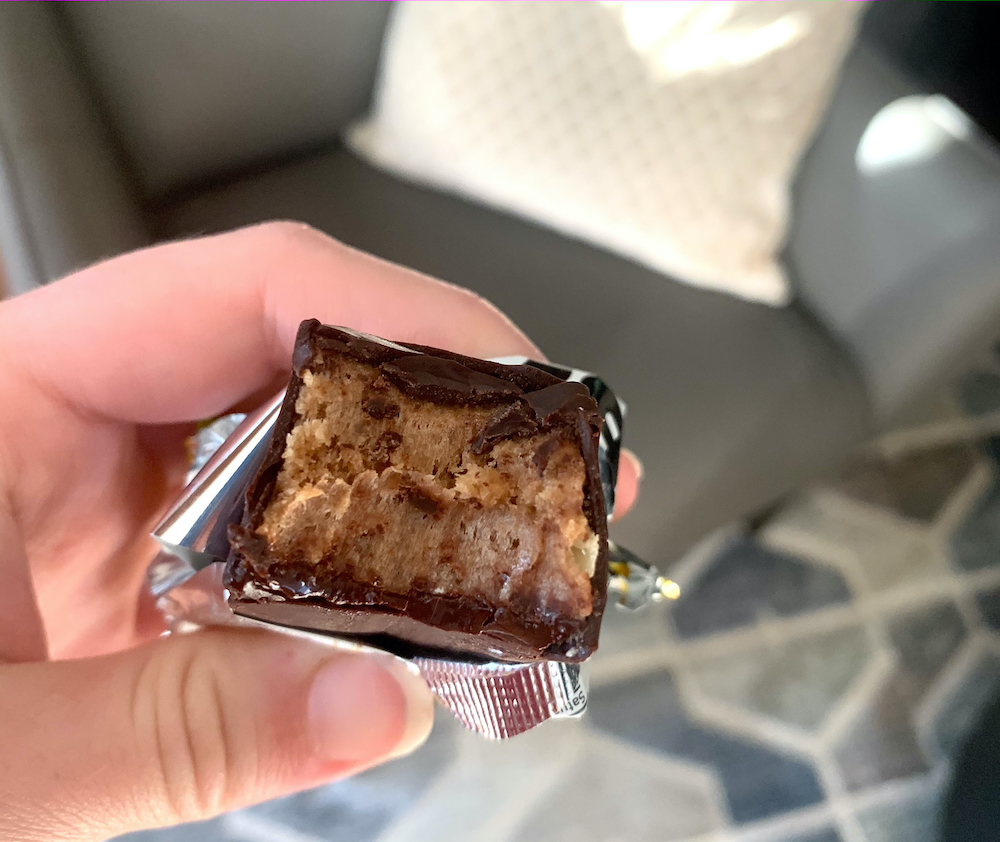 This bar I hold near and dear to my heart. This was the first built bar flavour I ever tried that initially got me hooked (albeit was called “Banana Chocolate Creme” at the time, this one is pretty darn close).

This bar has such a realistic banana flavour and it tastes even better now that they've changed it to “Banana Bread”.

I don't even like artificial flavoured banana things so that goes to show how good this one is!

I remember my manager trying it for the first time saying “SAM, IT TASTES LIKE I'M EATING A REAL BANANA, THIS IS CRAZY.” 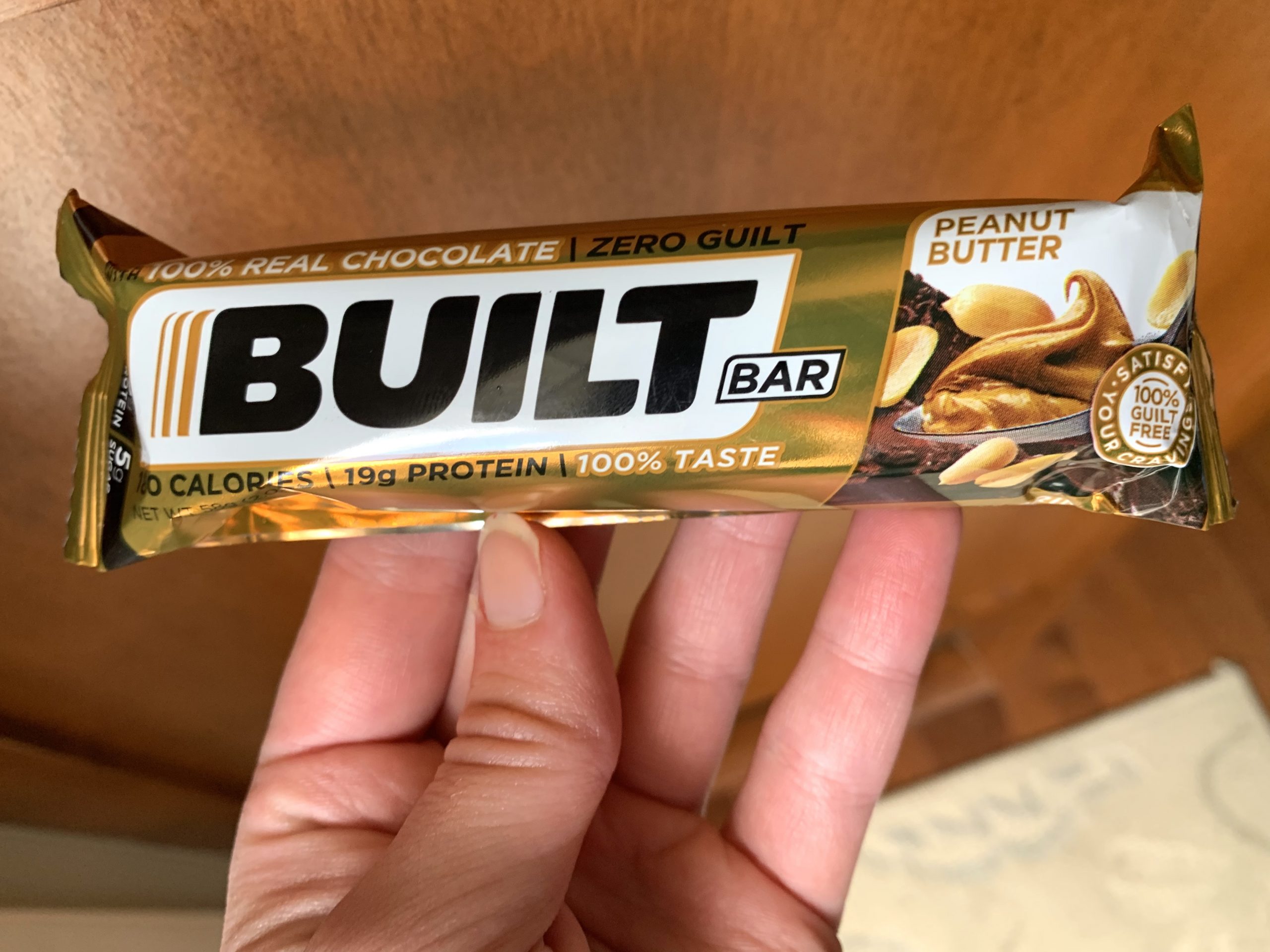 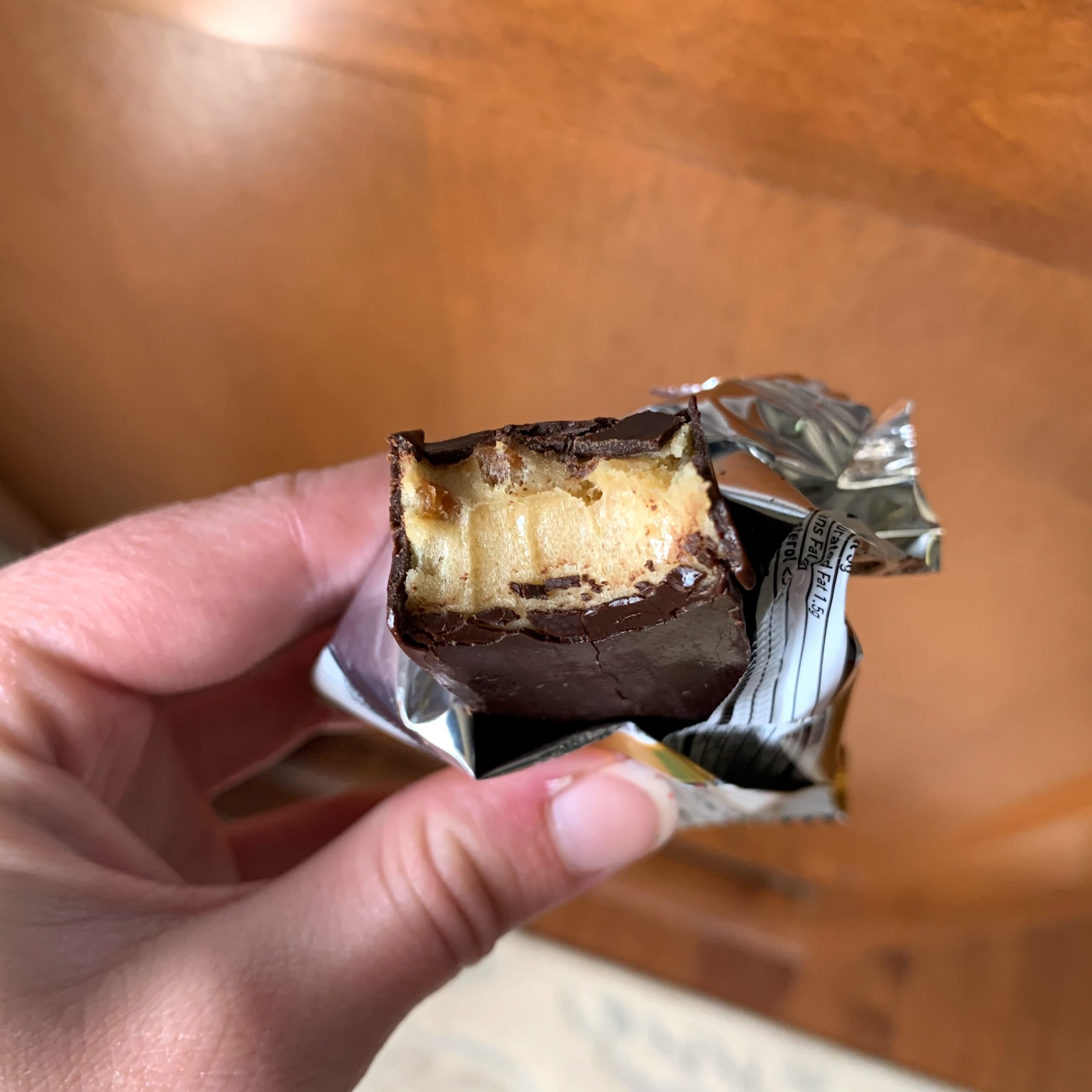 I love this bar! This one was actually my number one for quite a while but since they re-did the built bars…I have a new number one…

That's not to say I don't love this one still! It's a fantastic bar and I'd recommend it to anyone.

This bar hasn't changed much from the original !

No Photo… because clearly I didn't have time in the process of devouring this bar.

Ya.. I'm a huge coconut fan. So of course this bar was right up my alley. This has such an amazing coconut flavour, I seriously never cease to be impressed by these.

You can taste the real shredded coconut and combined with the chocolate..  it feels like you are eating some delicious dessert you shouldn't be eating! 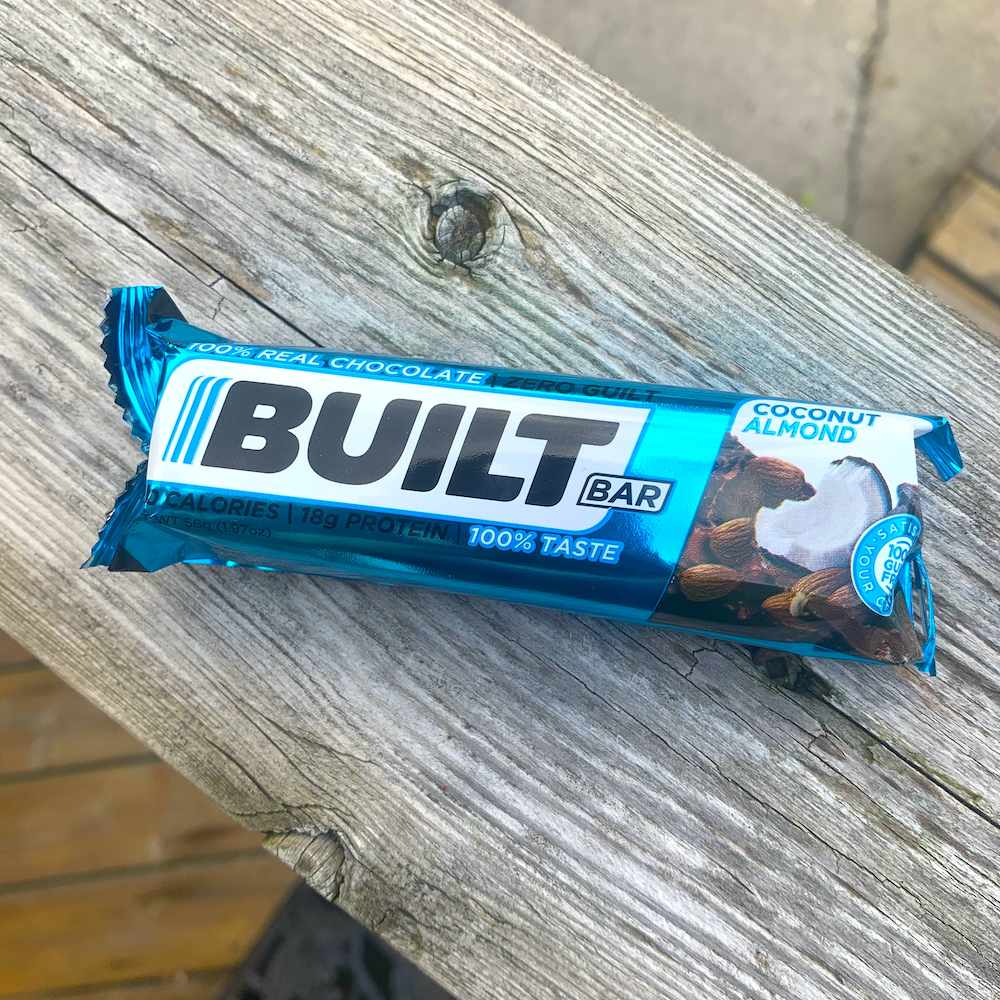 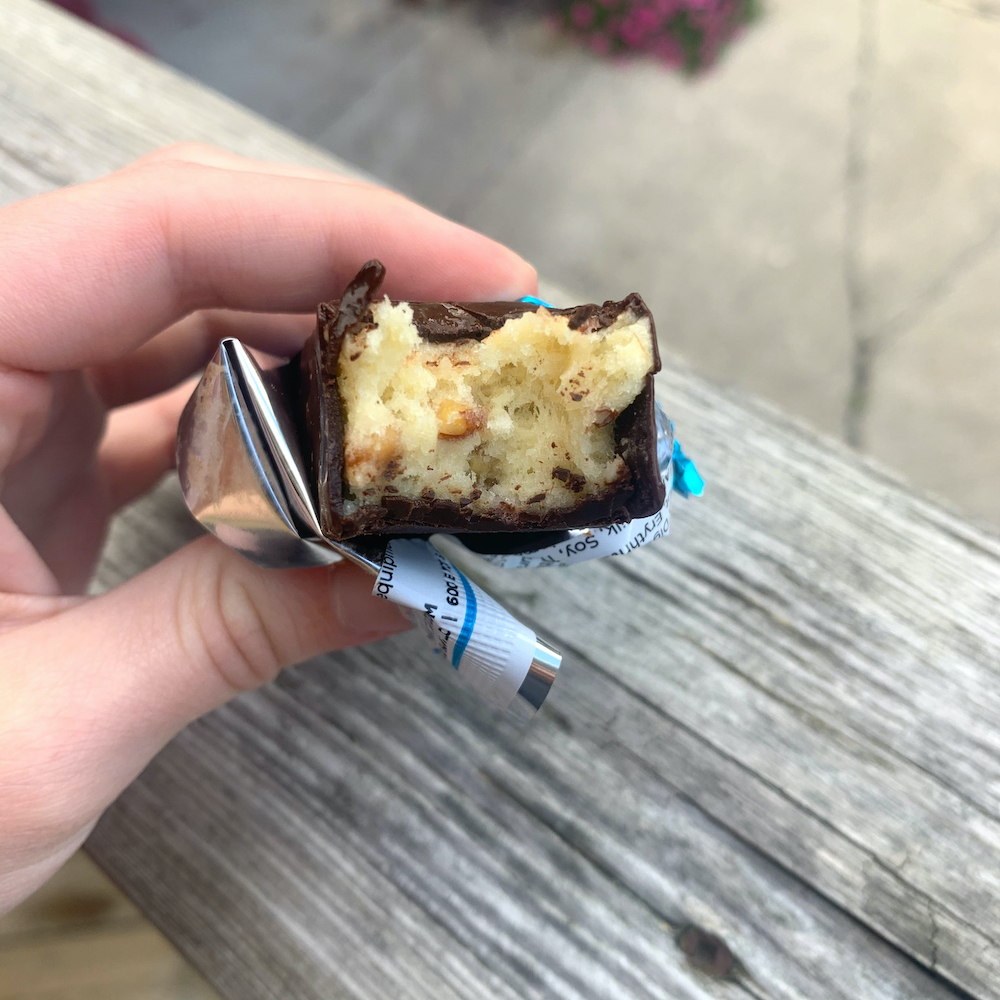 This bar has my heart 10000%. It's SO GOOD. The coconut on it's own is delicious but when combined with the large almond pieces…WOW. If you like bounty bars or coconut AT ALL, try this bar. You will not be disappointed one bit.

So there you have it!! This is my Honest Built Bars Review 2020!

The Built Bars website is live today so like I said before, you can use my discount SAM10OFF to get 10% off your order! You can click the link OR apply it manually at check-out.

I hope you enjoy these bars as much as I have! 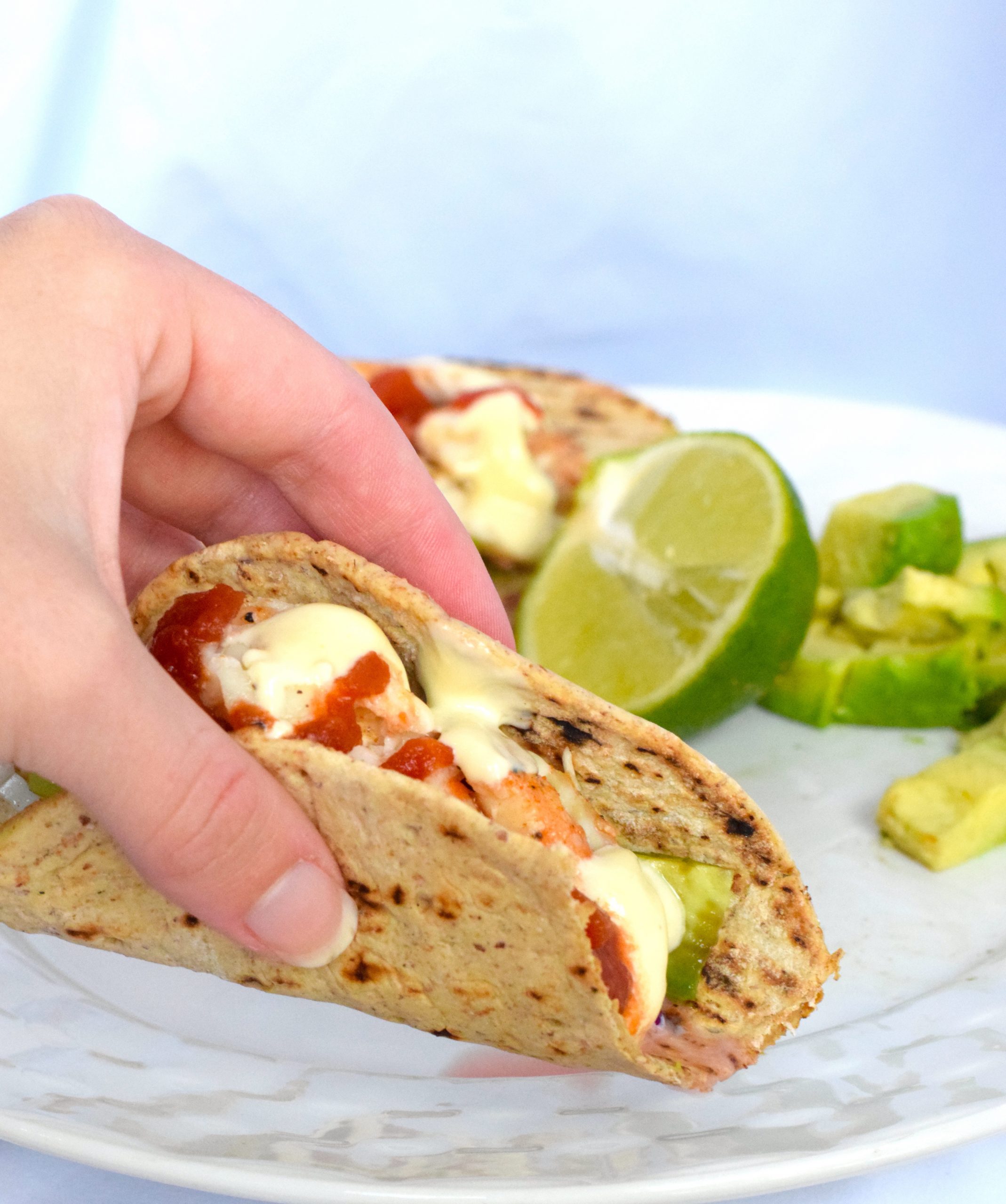 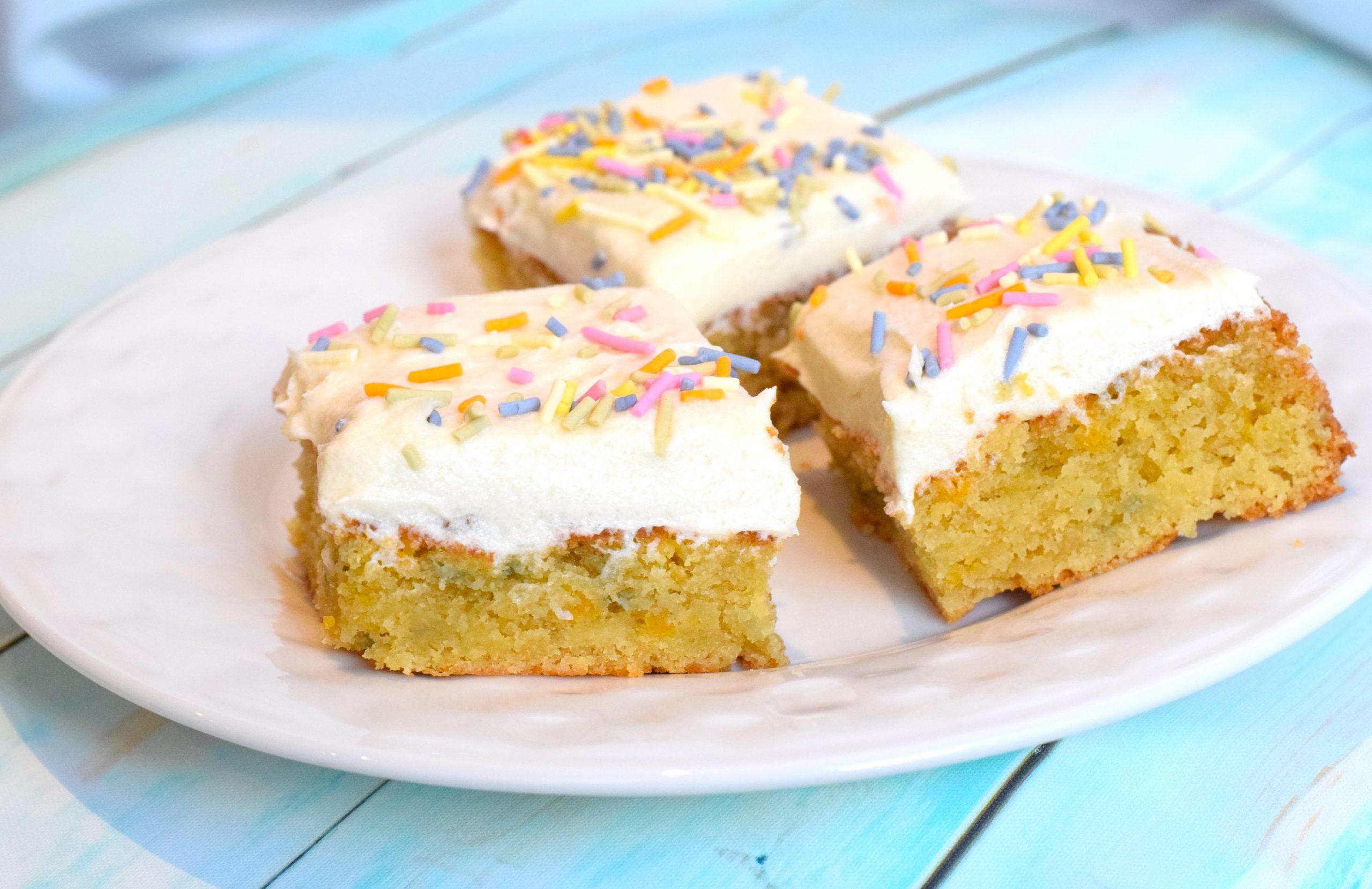 Not all of them are gluten free!! At a quick glance the Dark Chocolate Cookie Dough contains wheat. Others may as well. I haven't looked at the ingredients list of all of them yet. Please correct your review so you don't mislead those with Celiac disease.

I just got my Sample pack of 6 Built bars, and they are the most delicious protien bars I've ever tasted.. infact it's more like a candy bar.. these things are decadent and delicious and I want more!! Lol

Thats awesome to hear! I totally agree! Best bars out there. :D